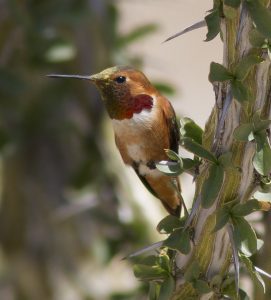 Allen’s hummingbird is similar to the Rufous hummingbird in many respects, and is thus fairly difficult to distinguish. The primarily reside along the Californian coast and make a short migration down to central Mexico for the winter. The species prefers coastal scrub, a common fixture in California, and they have benefited from many non-native species that have been brought into the region by human movement.

The primary food sources of Allen’s Hummingbird include flower nectar and hummingbird feeders, small insects caught on the wing or gleaned from leaves, and tree sap. They are important pollinators of the typical “hummingbird flowers”- any species red and tubular with high nectar production. Allen’s Hummingbird is the most important pollinator of the federally endangered Western Lily (Lilium occidentale), as well as other rare, coastal, native lilies and Bush Monkeyflower.

Island snapdragon, island monkeyflower, and island paintbrush are endemics of the Channel Islands, California and rely heavily on s. sedentarius for pollination. Important nectar sources include:

Allen’s Hummingbird is currently listed as an IUCN Species of Least Concern. Routine monitoring is important due its limited range. Some populations are increasing and some may be experiencing declines. In recent years, Anna’s Hummingbird, a direct competitor, has expanded its range. On the Channel Islands, human activity has been beneficial to this species. Many species of introduced plants, especially eucalyptus, bloom in Fall and Winter and provide an important food source. Allen’s Hummingbird is currently on the Partner’s In Flight Watchlist as a species of “moderate” conservation priority and is a USFWS bird of conservation concern due to limited range, particularly of S. s. sedentarius.

There are currently two recognized subspecies, the migratory Selasphorus sasin sasin and the resident S. s. sedentarius, found on the Channel Islands of California and on adjacent small sections of the mainland. S. sasin sasin is an edge species in Mexico and may be found near flowering shrubs. S. sasin sedentarius is common near introduced eucalyptus trees. They are also found in flowery gardens in the town of Avalon, Santa Catalina Island and on Los Palos Verdes Peninsula.

Sedentarius can be found around 300m of elevation in riparian woodlands and chaparral of north-facing slopes.  S. s. sedentarius is more tolerant of human disturbance, and is quickly replacing Anna’s Hummingbird in urban areas such as parks and university campuses, and is rapidly expanding its range beyond San Diego and Los Angeles. S. s. sasin prefers less disturbed habitat.

Allen’s Hummingbird is a relatively short distance migrant. They overwinter on the Southern California coast, central Mexico, and on the Gulf Coast of Alabama. In both Spring and Fall migration Allen’s Hummingbird utilizes habitats along the coast including coastal scrub, riparian woodland (also at higher elevations in Fall), chaparral, and eucalyptus groves. They utilize coniferous and mixed forests in Fall as well. Allen’s Hummingbird is commonly seen at feeders. They arrive on breeding grounds as early as February, and Fall migration can begin as early as mid-May, with the peak in July. 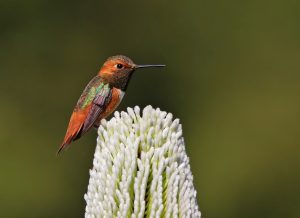 Allen’s Hummingbird was named after Charles Marin, a collector who lived in California in the late 1800’s to early 1900’s. He was among the first to notice the differences of this species from the closely related Rufous Hummingbird. The name, Selasphorus alleni, was given by Henry Henshaw, who described the species in 1877.

Allen’s Hummingbird is very difficult to distinguish from Rufous Hummingbird, especially since their vocalizations are identical and there is great potential for range overlap, especially in southwestern Oregon. They are small hummingbirds, extensively rusty in all ages and sexes. Like Rufous Hummingbirds, their wing beats produce a whistling noise. Vocalizations include a series of sibilant chip notes and a zee-chuppity-chup given in chase. Adult males have an iridescent scarlet gorget, slightly elongated at the bottom corners of the throat. They can usually be distinguished from Rufous by their solid green back. The nape and top of head are bronze to green. The sides of the face, flanks, and upper chest are cinnamon-rufous. The chest, belly, and breast are white, wings are dusky, and the rump is occasionally orange. Males can be aged by tail feathers, which are pointed and have varying amounts of white, green, red, and black. Width of the outermost tail feathers, which are very narrow, can help separate Rufous and Allen’s Hummingbird in the hand.

Females have a dull white chin, throat, and chest with cinnamon-rufous sides and flanks. The head and back are metallic bronze-green. Wings are dusky, and tail feathers are pointed and have varying amounts of white, green, red, and black.

Immatures are similar to adult female with less spotting in throat and less extensive rufous on the flanks. Adult female and immatures are inseparable from female Rufous Hummingbirds in the field, but tail measurements can be taken in the hand to aid in separation.

Allen’s Hummingbird nests as early as February, and a prolonged breeding season can last through June. Females lay 2 small, white eggs and bear helpless young. They can raise 2-5 broods, and do so alone. Nests are typically built in dense shrub or on the branch of a small tree. They are constructed of grasses or leaves and lined outside with mosses, lichens, and pieces of bark, and fastened to a branch with spider webs.

Cornell Lab of Ornithology. 2014. Allen’s Hummingbird, All About Birds. Available at http://www.allaboutbirds.org/guide/allens_hummingbird. Accessed on November 4th, 2014.