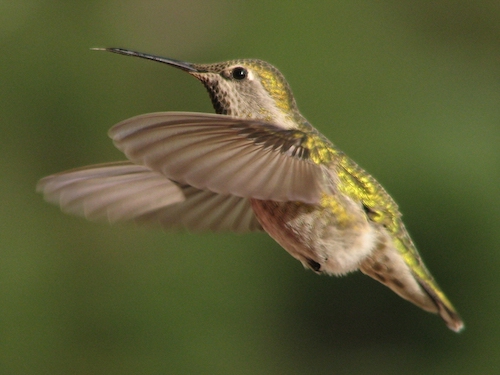 The medium-sized and stocky Anna’s Hummingbird is one of the most common hummingbirds in its range, which spans the Pacific coast from British Columbia down to northern Baja California, and east through southern Arizona and northwestern Mexico. The male is conspicuous due to his brilliant rose-pink crown and neck; his distinctive and often-repeated scratchy, metallic song; and his thrilling dive display during which he emits an explosive and pleasing squeak. The Anna’s Hummingbird – a frequent visitor at hummingbird feeders – is an IUCN species of least concern.

Anna’s Hummingbird drinks nectar from a variety of flowering plants and it regularly visits hummingbird feeders. It feeds on tiny spiders and insects – such as midges, whiteflies, leafhoppers – by snatching these prey from crevices, understory leaves, stream banks, flowers, other surfaces, or out of the air. Anna’s Hummingbird also feeds on naturally occurring tree sap as well as tree sap oozing from holes made by sapsuckers. 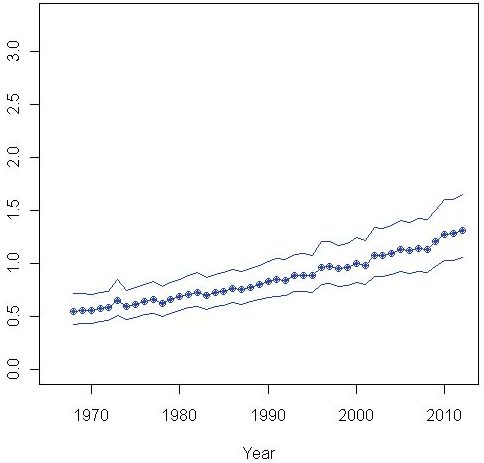 An analysis of North American Breeding Bird Survey data indicates that the Anna’s Hummingbird population has increased by 2% per year from 1966 to 2010. In 2012, Partners in Flight estimated the global breeding population of Anna’s Hummingbird to be 5 million individuals; 96% of these occur in the USA at least part of the year, 13% in Canada, and 15% in Mexico. The Anna’s Hummingbird has thrived alongside humans, likely due to the benefits it garners from cultivated flowering plants, including introduced eucalyptus and tree tobacco that bloom during the winter when native species do not.

Anna’s Hummingbird is an IUCN species of least concern.

Anna’s Hummingbird is common in urban and suburban settings – such as yards, parks, and residential neighborhoods – and it also occurs in oak savannas and woodlands, riparian woodlands, coastal scrub, chaparral, and eucalyptus groves (note: the eucalyptus tree is an introduced species in the United States). The Anna’s Hummingbird frequently visits hummingbird feeders at home residences, and it benefits from the nectar and nest sites provided by exotic plant species cultivated by people in towns and cities. 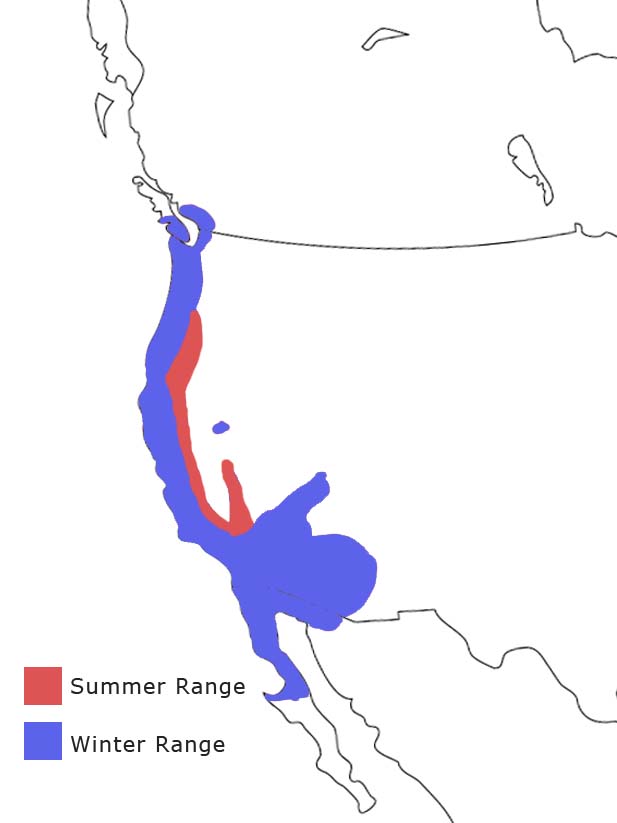 The Anna’s Hummingbird is one of the most common hummingbirds in its range. The species breeds from Vancouver, Canada south to northern Baja California and east through southern Arizona. Its range expands slightly in all directions in winter, as birds travel up the coast of British Columbia, southward into northwestern Mexico, and east into New Mexico.

The range of the Anna’s Hummingbird has expanded greatly since the 1930s. Before this time, breeding populations of Anna’s Hummingbird occurred only as far north as the San Francisco Bay area. The planting of exotic flowering plants in urban and suburban areas increased the availability of nectar and nesting sites for this species, helping it inhabit new regions to the north and east. The increase in the number of hummingbird feeders has also benefited this species. 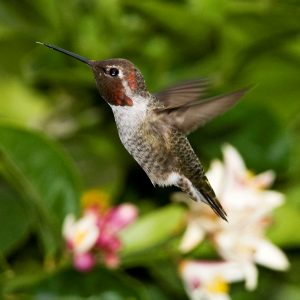 The Anna’s Hummingbird is medium-sized and stocky compared to other hummingbirds. It has a straight, short-to-medium length bill, which appears heavier than the slightly curved bill of Costa’s Hummingbird. The tail is fairly broad and its mostly green and gray body (green above, grayish below) does not have any rufous or orange marks like those found on the bodies of some other hummingbirds, such as Rufous and Allen’s Hummingbirds.

The adult male has an iridescent reddish-pink gorget covering much of the crown and throat, with elongated feathers projecting off the sides of the throat. When males are perched, their tail feathers extend well beyond the wingtips. The adult female Anna’s Hummingbird has some rose gorget feathers on its neck, a trait rare among female hummingbirds. When females are perched, their tail feathers extend about as far as their wingtips.

The male Anna’s Hummingbird is extremely vocal; its distinctive scratchy, metallic song can be heard throughout the year. As he sings, the male moves his head frequently, flashing the brilliant iridescence of his gorget. Additionally, the male performs a thrilling dive display in which he suddenly fans his tail feathers at the bottom of the dive to produce an explosive and pleasing squeak.

The Anna’s Hummingbird tends to perch above head-level in trees and shrubs. When it hovers it usually holds its tail still, unlike some other hummingbirds.

Male and female Anna’s Hummingbirds only associate with each other for the act of copulation. The female chooses the nest site: typically a horizontal branch 6-20 feet off the ground, often in an oak, sycamore, or eucalyptus tree or a vine or shrub and near a nectar source. The female builds the 1 inch tall by 1.5 inch diameter nest over a period of one week, using some of the following materials: plant down, cattail, willow leaves, thistle, small feathers, lichen, mosses, spider webs, and insect cocoons. The female incubates the eggs and cares for the young. Nesting occurs in winter or early spring, depending on the availability of nectar and small insects for food. Anna’s Hummingbird breeds at elevations from sea level to nearly 6,000 feet above sea level.

Cornell Lab of Ornithology. 2014. Anna’s Hummingbird, All About Birds. Available at http://www.allaboutbirds.org/guide/annas_hummingbird. Accessed on September 19th, 2014.