The Black-chinned Hummingbird is a familiar species at lower elevations in the American southwest. They are small and thin with broad, curved wingtips and are extremely adaptable to their landscapes, surviving in harsh desert and mountain lowland environments. This has led to a dramatic increase in their population since 1966 as many have take to large urban environments and adapted to life in areas disturbed by development.

The Black-chinned Hummingbird often feeds on small insects and ballooning spiders on the wing, as well as a variety of nectar plants. While hovering, these hummingbirds extend their tongue into the corolla, darting it in and out at a rate of 13-17 licks per second. The Black-chinned Hummingbird is an important avian pollinator, and in parts of its range it is the only pollinator for important native plants. In the mountains of Arizona, it pollinates the native beard-lip penstemon (Penstemon barbatus) and squawfeather (Castilleja integra).

Black-chinned Hummingbirds have been observed pollinating over 90 species of plants, including:

According to the North American Breeding Bird Survey, Populations of Black-chinned Hummingbirds have been increasing since 1966. This is largely due to the species being drawn out of native habitats and into urban habitats, where ornamentals and feeders are common and offer plentiful food sources year-round. They are not listed as an IUCN Species of Concern and they are not on the Partners in Flight 2012 Watch list, as their population range is small, largely concentrated in the Southwest United States, and estimated at 5 million. They rate an 11 out of 20 on the Continental Concern Score, and while numbers are increasing, it is important to note that there is potential impact on other hummingbird species and flowering plants as a result of leaving native habitats.

The Black-chinned Hummingbird is exceptionally adaptable, living in a wide range of natural and disturbed habitats. They are primarily found in desert and mountain lowlands, living at elevations that range from sea level to over 2500 meters. This elevation range encompasses a huge variety of habitat types including riparian canyons, xeric desert washes, and high elevation forest. In the southwest, they are most commonly found in canyons with riparian species such as willows, cottonwood, sycamore, and salt-cedar.

These hummingbirds are commonly seen in human-created landscapes, such as recently disturbed habitats and suburbs, as long as there are tall trees, vines, and flowering shrubs. Black-chinned Hummingbirds often frequent feeders in urban areas.

Little is known about their overwintering habitat, but they have been found in oak-dominated habitats along the Gulf Coast.

The Black-chinned Hummingbird breeds at low elevations throughout foothills and mountains of the western United States and as far north as British Columbia. It winters primarily along the Pacific Coast of Mexico, as well as the Gulf Coast in the southeastern United States. Spring migrants return mid-April and Fall migration typically begins in August. 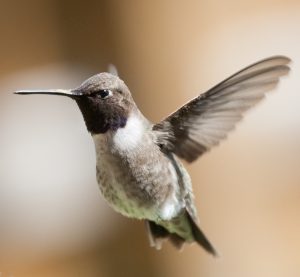 Adult males have a black gorget bordered on the bottom by a thin strip of iridescent violet. Adult females are pale-throated, occasionally with gray to green streaks, and have grayish-green flanks. The outermost three rectrices are tipped white. Immatures resemble adult females, though young males may show some violet feathers on the throat in their first Fall. Adult females can resemble adult female Costa’s hummingbird, though there are distinct differences in size and shape, and Costa’s Hummingbird tends to have grayer upperparts and brighter white underparts.

Black-chinned Hummingbirds have at least five different, varying high-pitched calls, with a soft tchew being the most common call. They can be seen perched on a tall branch surveying their territory and hawking for insects.

Like many species of hummingbirds, males and females have different habitat preferences. Black-chinned Hummingbird females are more common in riparian areas, such as canyon bottoms or floodplains, while males prefer adjacent drier slopes. Both can be found in urban areas with tall trees and many flowering shrubs and vines, where they may linger if there is abundant food or artificial feeders, as opposed to heading for higher elevations when flowers bloom.

Males display by diving before the females from a height of up to 100 feet. Nests are constructed on a bare branch at most 12 feet above the ground. Females lay 2 white, coffee bean sized eggs and can raise as many as three broods, though one is more typical in dry areas, such as the Sonora. The nest is at first a deep, compact cup constructed of soft plant and cocoon fibers, and bound together with spider silk. The nest is intended to stretch and flatten as nestlings grow. Insulation and thickness depends upon climate.

Cornell Lab of Ornithology. 2014. Black-chinned Hummingbird, All About Birds. Available at http://www.allaboutbirds.org/guide/black-chinned_hummingbird. Accessed on November 4th, 2014.

USDA Forest Service. 2014. Maintaining and Improving Habitat for Hummingbirds in Oregon and Washington, A Land Manager’s Guide. FS-1039a. US Department of Agriculture, Forest Service, in cooperation with the Western Hummingbird Partnership and Klamath Bird Observatory.