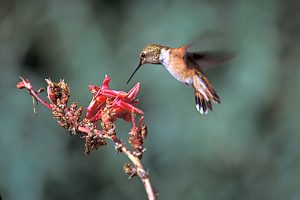 Broad-tailed Hummingbirds are the most common species among high altitude areas of the Rockies and California. This medium-sized bird has a shiny green upperbody and is distinctive from it’s light gold speckling on its torso. This species has witnessed significant declines in recent decades, largely due to the destruction or disturbtion of large open spaces that it uses for its summer breeding.

Breeding coincides with floral nectar production of montane shrub and wildflower species. Broad-tailed Hummingbirds will also take small insects, gleaning them from leaves or captured on the wing. Females will feed young primarily on small insects and spiders found on nectar plants, as well as swarming gnats. Insects and sap are taken from sap wells, primarily those made by Red-naped Sapsuckers in willow bark. Early food sources include Delphinium nelsoni followed by Ipomopsis aggregata, Castilleja miniata, and Delphinium barbeyi. The following species are important food sources for Broad-tailed Hummingbirds: 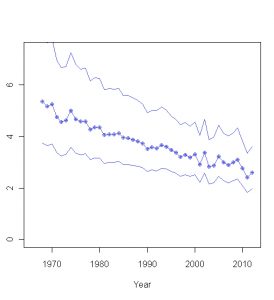 Broad-tailed Hummingbirds are an IUCN species of least concern, but in the last decade significant declines have been documented in riparian habitats in Utah and western coniferous forests, as well as a 15-49% decline in the Southern Rocky Mountains of New Mexico. Reasons for these declines are unknown, but potentially linked to fire suppression, timber harvest, and grazing.  Feeders artificially elevate populations in times of nectar scarcity, and birds drawn to urban areas have a high risk of window and car collision. In rural areas, electric livestock fences are known to kill broad-tailed hummingbirds, as they are drawn to the red plastic insulators. Cutting overstory trees may have short-term benefits by helping flowering shrubs bloom. Past and future long term effects of climate change are unknown, but will likely impact a species well adapted to extreme conditions as moisture and seasonal phenology will change. 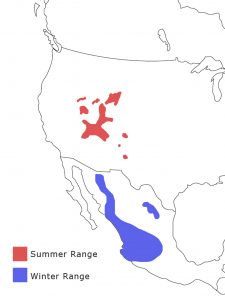 Broad-tailed Hummingbirds range across the south-central mountains of the western United States, and there is extensive overlap between their breeding and wintering ranges. They are casual vagrants to the Gulf Coast in Fall and Winter.

Broad-tailed Hummingbirds winter in central Mexico at elevations of 2300-3000m, in habitats dominated by oak and interspersed with pines and cypresses. At higher elevations, they are found in fir (Abies religiosa) forests interspersed with oaks. In Jalisco, near Volcán de Colima, they reside in arid thorn forests as well as arid and humid pine-oak transition zones. In western Mexico’s tropical highlands, they are more abundant in non-forested habitats. 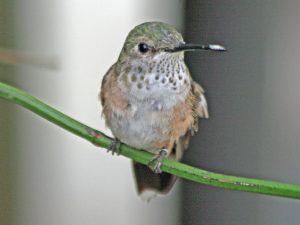 Broad-tailed Hummingbirds are a medium-sized hummingbird with shiny green upperparts. Male has green flanks and white underparts and a rose red gorget. Female has blended buff on underparts and a white throat with iridescent green or bronze speckling, similar to female Calliope Hummingbird. Immature is similar to adult female, with more extensive speckling.

Breeding season begins as soon as there are available food sources. Broad-tailed Hummingbirds are highly promiscuous. They do not form pair bonds and will mate with several individuals throughout the breeding season. Males have spectacular displays, climbing to great heights, hovering and trilling loudly with their wings before diving down toward the females. Males do not help raise young. Females build a small cup nest of spider webs and gossamer in as little as 5 days, lining the outside with lichens and bark fragments, and anchoring the nest to a tree branch with spider webs. Good insulation is important in chilly climates. This greatly helps the female incubate eggs by decreasing her energy requirements and allowing her to enter torpor at night. 2 eggs are laid and a female will only have one brood a season. Incubation takes place over 16-19 days and nestlings are raised in 21-26 days.

Cornell Lab of Ornithology. 2014. Broad-tailed Hummingbird, All About Birds. Available at http://www.allaboutbirds.org/guide/black-chinned_hummingbird. Accessed on November 4th, 2014.