The Calliope Hummingbird is an especially small bird, weighing in at the same amount as a penny. The bird is notable for its general silence and rarely calls unless disturbed or is around other hummingbirds. They are common sights around mountains and other high-alpine regions in the West and around British Columbia. Despite their size, they migrate hundreds of miles down to Mexico for the winter, earning the distinction of the smallest long-distance avian migrant.

Like most U.S. hummingbirds, Calliope Hummingbird is a nectar feeder, although they will also hawk (perch on Salix spp. tips and hunt like a flycatcher) for small insects. They feed on nectar from a variety of flowers, especially those tubular and red, although they are also attracted to a variety of yellow, white, blue, and purple flowers. This hummingbird also feeds at Sapsucker wells, taking both insects and sap.

There is currently no immediate conservation concern for Calliope Hummingbird, and it is listed as an IUCN species of least concern. Feeders may artificially elevate population levels during nesting season, but contribute to high mortality in the winter months, which is why the species is listed as a Partners in Flight Watch List Species as well as a USFWS 2008 Bird of Conservation Concern.

Calliope Hummingbirds breed in cool climates in the mountains of the northwestern United States. They range in elevation as low as 134 m in the Columbia River and Burning Gorge and up to 3400 m (timberline) in the Sierra Nevada of California. Temperature ranges during the nesting season are 0.5-25˚C, 0-24˚C at stopover sites in Colorado, and 0-25˚C in Mexico and Arizona.

Calliope Hummingbirds utilize a variety of habitats throughout their range, primarily open montane forest, mountain meadows, and riparian areas dominated by willow and alder thickets. In California and Oregon, they have been observed nesting in clearcut or burned areas 8-15 years after disturbance, once in the late shrub-sapling stage of succession. In central and southern California, they nest primarily in aspen thickets near mountain streams.

Calliope Hummingbirds are commonly found in montane habitats throughout Western states and as far north as British Columbia. Their primary breeding range is in the Pacific States, expanding eastward into Idaho, Wyoming, Utah, and Nevada. They are rare in southeastern U.S.

Overwintering range is largely in Southern Mexico, though recent reports in the Southeastern United States indicate that they may be expanding their overwintering range, potentially due to human disturbance. These hummingbirds utilize both the Pacific and Rocky Mountain flyway, travelling along mountain ridges in Spring and arriving in Washington and Oregon in mid-April.  They utilize mountain and riparian corridors in Fall.  They are occasionally observed at low elevation feeders. Calliope Hummingbirds are rare or uncommon vagrants far west of the Cascades. Some may travel up to 9,000 km a year. 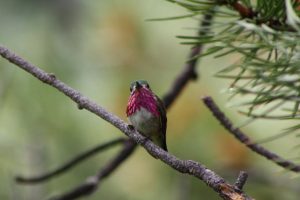 The Calliope Hummingbird, Selasphorus calliope, is the world’s smallest long-distant avian migrant, and North America’s smallest bird. Its mass is that of a penny, one third the smallest North American warbler. They have a very short bill and tail, with long primary projection (wingtips typically even with tail) and bright green upperparts. Males are stunning and unique, easily distinguished from females and other hummingbirds. Their scientific name, Stellula means “little star” and refers to the appearance of the streaked, v-shaped, magenta gorget when displayed in a starburst (high contrast between white on throat and distinct, carmine rays). Males have creamy-white underparts and greenish wash to flanks. Tail feathers are dull gray with variable cinnamon edging at the base. Females are bright green or golden-green, with creamy white underparts and a rusty wash to flanks and lower breast. Throat is evenly spotted dusky to brownish-bronze. Females can resemble female Selasphorous hummingbirds, but are much smaller, with a shorter bill and tail, and less rust on tail. Immatures resemble adult females.  In flight, Calliope Hummingbirds may hover with their tales cocked perpendicular to their body.

Calliope Hummingbirds are typically silent, but may give twittering and bickering calls when disturbed or around other hummingbirds.

Little is known about breeding and nesting behaviors of the Calliope Hummingbird. They primarily breed at mid-elevations of their range (4,000-7,000 ft). Males set up territories in montane open forest and meadows, while females nest in riparian trees and shrubs. Nests are built under an overhanging branch for protection from the elements.

Cornell Lab of Ornithology. 2014. Broad-tailed Hummingbird, All About Birds. Available at http://www.allaboutbirds.org/guide/black-chinned_hummingbird. Accessed on November 4th, 2014.