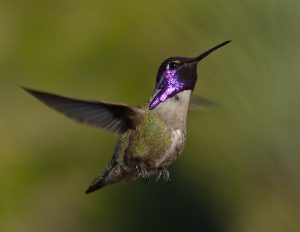 The Costa’s Hummingbird is a small hummingbird with green upperparts that primarily lives in the American southwestern United States and northwestern Mexico. The species has also been known to travel to the northwestern United States and even as a far as southern Canada and Alaska. The species is of least consern with regards to conservation, given its rich habitat and its ability to adapt to human landcapes. Recent development in the southwest has greatly altered the landscape, however, leading to some concern over the future of the bird.

Costa’s Hummingbird feeds opportunistically on nectar from many types of flowering shrubs, trees, cacti, and agaves. Two of the most important nectar-producing plants for this species are chuparosa and ocotillo; chuparosa provides reliable nectar during the winter, and ocotillo produces abundant nectar during the breeding season (March-April). Costa’s Hummingbird departs the desert from mid-June to October, when there is a shortage of nectar.

Costa’s Hummingbird also feeds on small insects on the wing, and likely gleans spiders and insects from vegetation to fulfill protein needs.

Below is a list of nectar plants important for Costa’s Hummingbird: 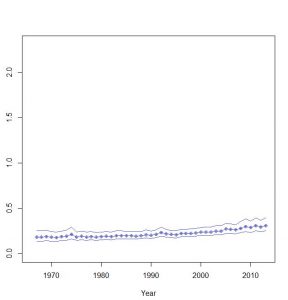 Costa’s Hummingbird is an IUCN Species of Least Concern. There is little information about the status of this species in many parts of its range, but it may be expanding its range in some areas and reappearing in other areas it formerly inhabited.

The most serious threat to Costa’s Hummingbird is the loss of habitat, particularly coastal scrub, chaparral, and Sonoran and Mojave Desert scrub. The Sonoran Desert scrub habitat that it relies upon is mostly intact but this habitat is being modified at an accelerating rate. A significant threat is the clearing and replacement of desert scrub, thorn forest, and tropical deciduous forest with South African buffelgrass (Cenchrus ciliaris) as forage for cattle—this practice is occurring primarily in Sonora, Mexico.  Additionally, the invasion of desert scrub by exotic fire-prone grasses is another issue requiring management attention for this species. Nonetheless, the top management priority for Costa’s Hummingbird is to retain and restore its natural habitat, including the heavily imperiled California coastal scrub.

Hummingbird feeders placed out by humans may provide a benefit to this species, but the magnitude of this possible benefit is unknown. Human development in the southwestern U.S., however, has dramatically altered native vegetation and the resulting occurrence of exotic plants and hummingbird feeders has possibly favored Anna’s Hummingbird at the expense of Costa’s Hummingbird.

Costa’s Hummingbird is known as a hummingbird of the desert, and it can be fairly common in the right habitat. It breeds in desert washes, dry chaparral, arid brushy foothills, and low elevation scrubby habitats of the Mojave and Sonoran Deserts. It can also be found breeding near springs and in canyons, riparian woodlands, California chaparral, sage scrub habitats, the Cape deciduous forest of Baja California, and—to a limited degree—in residential settings.

In the Mojave Desert, Costa’s Hummingbird is more associated with springs and riparian areas; consequently, it is less abundant and widespread here than in the Sonoran Desert.

Most Costa’s Hummingbirds probably winter in Mexico in Baja California and Sonora in chaparral, scrub, gardens, woodland habitat, arid brushy foothills, or adjacent mountains. Unfortunately, information on habitat use for this species in winter is very limited. 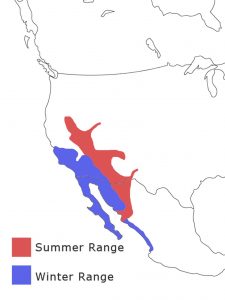 Costa’s Hummingbird winters in northwestern Mexico throughout Baja California, along the mainland coast of the Gulf of California, and south along the Pacific Coast to about Puerto Vallarta.

The species occurs casually north to southern Alaska and east to Texas. It has been observed numerous times in the Pacific Northwest since 1970 and occurs annually from northern California to Oregon. It is less commonly observed east of the Arizona-New Mexico border. Also, its non-breeding range in California appears to be expanding.

The Costa’s Hummingbird is a small hummingbird with green upperparts. The adult male has a deep blue-violet crown and gorget that extends far down the sides of the throat. The female is white underneath, including an all-white throat that sometimes contains a few violet feathers.

It is possible to distinguish female and immature Costa’s Hummingbirds from female and immature Anna’s and Black-chinned hummingbirds in the field, although doing so depends on close views, experience, and attention to body size, shape, and call notes. The female Costa’s tends to be grayer above and whiter below than the female Black-chinned. The Costa’s Hummingbird does not have rufous coloration in its tail, and this – along with other characteristics – distinguishes it from Broad-tailed, Lucifer, Allen’s, and Rufous Hummingbirds.

Voice is one of the best ways to distinguish Costa’s Hummingbird from other species. The call is often given in a series, and it is a high-pitched metallic tink. Males give a loud zing call, as well as a high thin whistle during display flights and from perches; the whistle increases steadily in pitch, peaks, and then decreases steadily.

The male Costa’s Hummingbird performs an elaborate courtship that includes a spectacular dive display and a distinctive whistled vocalization. After mating occurs, there is no evidence that the male helps care for the eggs or young.

Nests are typically built in sparsely vegetated trees and shrubs, and located 1-2 m above the ground. Costa’s Hummingbird lays 2-3 eggs that hatch into helpless young. Sometimes a female will rear two broods in a season, but one brood is believed to be much more common. It has been hypothesized that the species may rear a brood in one habitat and later move to another habitat to rear a second brood, but this has yet to be substantiated.

Cornell Lab of Ornithology. 2014. Costa’s Hummingbird, All About Birds. Available at http://www.allaboutbirds.org/guide/costas_hummingbird. Accessed on November 4th, 2014.