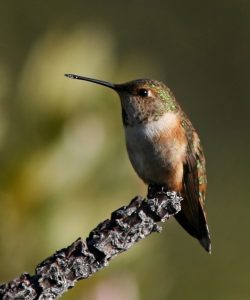 Rufous Hummingbirds are small hummingbirds with a straight, slender bill, short wings, and a tapered tail that appears pointed when resting. During the summer breeding months, they concentrate in the Pacific Northwest in British Columbia up to southern parts of Alaska. During the winter, many retreat thousands of miles down to south-central Mexico.

Rufous Hummingbird feeds on a variety of red, tubular flowers, as well as insects, which make up a high proportion of their diet during the breeding season. They can be observed feeding on insects by hawking, gleaning from leaves, and plucking them out of spiderwebs. The following are preferred flowering plants and insects. 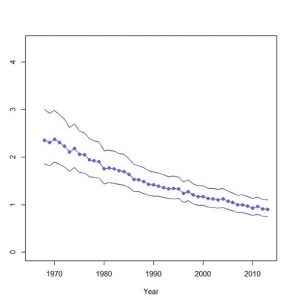 According to the North American Breeding Bird Survey, from 1966 to 2010 Rufous Hummingbird populations declined by over 2 percent every year, resulting in a cumulative decline of 62 percent. There is an estimated global breeding population of 11 million by Partners in Flight. Approximately half of those breed in the U.S. and half in Canada, with 100% of all Rufous Hummingbirds wintering in Mexico. Rufous Hummingbird is listed as a Common Bird in Steep Decline. They rate a 13 out of 20 on the Continental Concern Score and are a 2012 Watch List species.

Rufous Hummingbirds prefer second-growth forest communities and openings, but they will also use mature forests, parks, and residential areas—from sea level to 6,000 feet.  Commonly utilize hummingbird feeders when available. All ages and both sexes are aggressive in defense of territory and forage resources, including feeders.  Thought to be closely associated with the Red-breasted Sapsucker, nesting near sap wells and may follow the woodpecker around during the day, feeding at the wells the sapsucker keeps flowing.

The Rufous Hummingbird is the most common and widespread hummingbird species in Alaska, and can be found in a wide variety of habitats. This species travels farther north than any other hummingbird, wintering in Mexico and Southeastern US and migrating to breeding sites as distant as Prince William Sound, Alaska.

Although a relatively small hummingbird, it has an aggressive nature and frequently chases larger hummingbirds from nectar sources. It is an important pollinator in the cool, cloudy Pacific Northwest, where cold-blooded insect pollinators are at a disadvantage.

The Rufous Hummingbird makes one of the longest migratory journeys of any bird in the world from Alaska to Mexico. Rufous hummingbirds usually begin arriving in Southeastern Alaska by April, with males arriving earliest and beginning their migration south by July. Females are also present in April, but in smaller numbers and typically stay through July during incubation and rearing of young. Successful nests start incubating between late May and late June with fledging in July. As with other hummingbirds, Rufous Hummingbirds typically move to higher elevations for the fall migration, following nectar producing flowers. 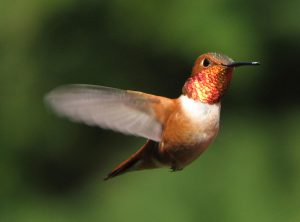 The back of the adult male Rufous Hummingbird is cinnamon-colored (rufous), sometimes spangled with green and rarely more than half green. The underparts are creamy white with a rufous “vest.” The crown is bright green, and the gorget is iridescent scarlet to orange, appearing golden or yellow-green from some angles. The tail extends past the wingtips. The rufous tail feathers are black-tipped and pointed.

The adult female is bright green above and white below, strongly washed with rufous on the sides, flanks, and undertail coverts. The face and sides of the gorget are also washed rufous. The gorget is off-white, spangled with green to bronze. The throat is marked with red-orange, from just a few spangles to a large patch depending on the individual. The rounded tail extends past the wingtips; it is rufous at the base and banded with black. The outer three pairs of tail feathers have white tips. Immature birds look similar to the adult female, although the immature males typically show more rufous on the rump and lower back as well as heavier markings on the throat.

Male Rufous Hummingbirds perform a steep oval or J-shaped courtship display for females. If the female perches in a male’s breeding territory, he may perform a low, horizontal figure-8 display.

Female Rufous Hummingbirds construct nests alone using soft plant matter bonded with spiderwebs. She finishes the outside with flecks of lichens, mosses, and tree bark and cements it to the drooping branches of coniferous or deciduous trees up to 30 feet off the ground, and occasionally in thimbleberries, ferns, or vines.  Nests have an outside diameter of 2 inches, the inner cup diameter is about an inch. Nests can be reused multiple seasons if in good condition, and may not be used by the same female. Females lay 2-3 white eggs and only raise one brood per season. Incubation lasts up to 17 days and nestlings are raised in as little as 19 days.

Cornell Lab of Ornithology. 2014. Rufous Hummingbird, All About Birds. Available at http://www.allaboutbirds.org/guide/rufous_hummingbird. Accessed on November 4th, 2014.

USDA Forest Service. 2014. Maintaining and Improving Habitat for Hummingbirds in Oregon and Washington, A Land Manager’s Guide. FS-1039a. US Department of Agriculture, Forest Service, in cooperation with the Western Hummingbird Partnership and Klamath Bird Observatory.