Western Hummingbird Partnership collects and updates a variety of hummingbird data. We strive to maintain the highest level of quality and integrity in our information.

Hummingbirds live only in the western hemisphere, where they are the second most diverse family of birds (approximately 340 species). Their diversity is well represented among North American bird families with 57 species, of which 40% are endemic to North America, 14% are substantially shared among the nations, 30% are migratory, and 14% are of high conservation concern (Berlanga et al., 2010).

There are indications that at least some hummingbird populations are declining. Partners in Flight (PIF) had identified three of the 13 neotropical migrants the breed in the USA and Canada and over-winter in Mexico as Watch List Species: Costa’s, Calliope, and Rufous, and a fourth: Lucifer, as a Stewardship Species (Rich et al 2004). The USFWS 2008 Birds of Conservation Concern also listed Costa’s, Calliope, Lucifer, and Rufous as well as Allen’s, Blue-throated, and Buff-bellied; seven species in total nationally.

Despite the wide distribution and cultural popularity of hummingbirds, knowledge of their basic life history and biology has many fundamental gaps. For example, all of the Birds of North America (BNA) accounts for hummingbirds identify information gaps in breeding biology as a priority for future research. Nests are undescribed for over 60% of the 48 currently threatened or endangered hummingbird species (Wethington and Finley 2009). There is a paucity of demographic information, including information on birthrate and mortality. The physiology of hummingbirds during reproduction is almost completely unknown. Habitat requirements for all life phases are not fully understood for most species.

Due to hummingbirds’ small size, rapid movement, high-pitched vocalizations, unique flight abilities, and other factors, techniques used to monitor most landbirds generally fail to provide adequate hummingbird population information. Long-term population trend data are considered adequate for only four of the 16 species that regularly breed in the USA and Canada (Rich et al. 2004). Population trend data for other hummingbird species in the Western Hemisphere are insufficient or non-existent.

Looking for data about hummingbird populations or a place to submit your research data? There are several sources available.

The Avian Knowledge Network (AKN) is a partnership of people, institutions and government agencies supporting the conservation of birds and their habitats based on data, the adaptive management paradigm, and the best available science. AKN partners act to improve awareness, purpose, access to, and use of data and tools at scales ranging from individual locations to administrative regions (e.g., management areas, states, countries) and species ranges.

eBird is a real-time, online checklist program where observers may submit their data. These data also provide rich sources of information about bird abundance and distribution at a variety of spatial and temporal scales.

aVerAves México is the site for submitting bird observations in Mexico and serves as the eBird equivalent for that country. It also includes tools that help analyze observations.

Citizen Science projects have immense value. In these projects, volunteers record and then submit their observations of the natural world, according to instructions (i.e., protocols) provided by scientists. Citizen Scientists increase their knowledge and appreciation of nature, while making meaningful contributions to nature conservation. Help hummingbirds by joining one of the projects below:

Hummingbirds at Home – Share your hummingbird sightings through this Audubon initiative.

Nature’s Notebook – Choose your species and contribute observations to the National Phenology Network.

Project Feederwatch – Count birds at your feeder during winter in this Cornell Lab of Ornithology and Bird Studies Canada project.

Budburst – Make observations on hummingbirds and then record and analyze your data. 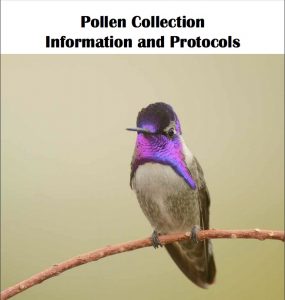 The Pollen Guide is a document containing pollen collection information and protocols. The file also includes in-depth descriptions of various types of pollen that are most favorable to hummingbirds. Click on the photo to view the file and learn more about pollen collection.