This report brings attention to a bird species that is experiencing precipitous population declines. Learn more about the Rufous Hummingbird, its life cycle, and how the Western Hummingbird Partnership is working to identify gaps in our knowledge about the factors that affect their populations. 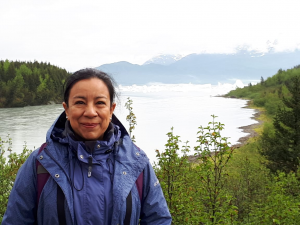 Between the icebergs and whale sightings, not many people visiting Alaska would notice the lack of Rufous Hummingbirds during the time that they are supposed to be abundant. But this is what Sarahy Contreras is working to change – her most recent project consists of tracking hummingbirds along their migration route throughout the Americas. The information she finds is crucial to spreading more awareness about the Rufous Hummingbird and other hummingbird species and improving conservation tactics. Sarahy has been working to protect birds for much of her life. Now through her research, she is diving into the world of the hummingbird migration and learning just how much the loss of hummingbird species could impact human life if we do not act fast.

Q1  How did you first become interested in birds?

It was many, many years ago. I have always been interested in conservation and the environment. But I had the opportunity to start working with birds at the University of Guadalajara because one of my advisors encouraged me to study birds. He also introduced me to hummingbirds.

Q2  What are your specializations within environmental conservation?

My specializations are ecology and conservation. Specifically, I like to look at hummingbirds and land-birds both in the tropics and mountains. Also, I look into how humans impact birds – their habitat, migration and overall wellbeing.

Q3  How did you come to focus on hummingbirds in particular?

I focus on hummingbirds because they are special birds. They just have different characteristics from other birds, like they don’t have a brain stem and their mobility is different. I also like to study the relationship between birds and fires; how they impact them and how they respond both in the long-term and short-term.

Q4  Can you tell me about your first research experience in the US at the Crested Butte?

I was one of the fortunate students chosen from the organization Partners in Flight that takes students to US. So, I got to travel to the Rocky Mountains and study hummingbirds there.

Q5  Can you tell me a broad overview of the other research you’ve done?

Generally, in my research I look for demographics, how to protect the birds’ migration and the proportion of populations between females, males and adults.

Q6  What work are you doing now?

I am trying to understand the long-distance migration of birds to conserve the species. The Rufous Hummingbird is declining – I think in a small scale there is not enough food maybe because of climate change. They need specific flowers and the timing of flowers is changing so it can be dangerous for the hummingbirds. Like in Western Mexico, where I live, they need salvias. But they don’t have enough so it can be bad for them. So, in my project we are trying to put together the information on a bigger scale to understand how to help the hummingbirds. 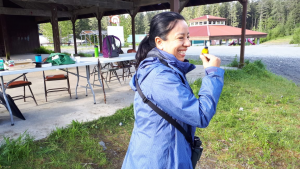 We are connecting field studies to the migration route in order to see where they stop and how they move throughout the route. First, we find the route and establish monitoring sites, then we search for the birds. Once we find the birds we band them – like a catch and release to track their movement. In Alaska, we also contacted people who study hummingbirds there and especially the Rufous Hummingbirds. The entire migration takes 8 months so we are trying to learn the complete cycle in order to give better management and conservation advice. Also, we need the information to put together festivals to spread awareness.

Q7  What has interested you the most in your work so far?

The site fertility has been the most interesting. But also, how many years they live considering how far they travel. Hummingbirds can survive the climate conditions better than humans can. They are so small but they are so strong. And they are trying to survive but we need to help them. We need to conserve biodiversity because it relates directly to the wellbeing of humanity.

Q8  Have you encountered any problems in your research?

The main problem is financial support. It is hard to keep the monitoring station going in the long term and sometimes I have to use some of my own money.

Q9  What would you like other people to know about the work you’re doing now?

I would like people to know that if we can collect efforts throughout the hummingbirds’ migration route we can work together to save the species. Also, the Western Hummingbird Partnership is connecting people, researchers and society. 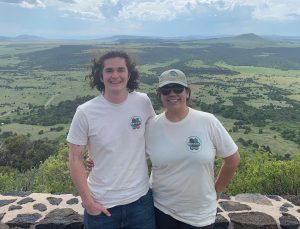 Xavier Rivera, a Mosaics in Science intern, has been banding and studying hummingbirds for the past few months at Capulin Volcano National Monument. Mosaics in Science is a diversity internship program and partnership of Environment for the Americas, that gives opportunities for youth to learn from and work alongside the National Park Service. As the biological technician for Mosaics in Science this summer, Xavier conducted a research project where he categorized previously collected pollen samples from hummingbirds’ beaks in order to determine their preferred flower genus.

Capulin Volcano serves as an important migratory and nesting site for Black-chinned, Broad-tailed, Rufous, and Calliope hummingbirds, making it a hotspot for hummingbird research. Mosaics in Science interns have collected pollen in this region for the past several years, giving Xavier plenty of data to work with. After categorizing pollen into rare, common, or abundant, Xavier determined that Castilleja, Lupinus, and Penstemon are statistically more prevalent than plants from other genera. Although abundance is a subjective matter, hummingbirds do seem to favor these three flowers in northeastern New Mexico. Something to keep in mind if these plants are native to your area! 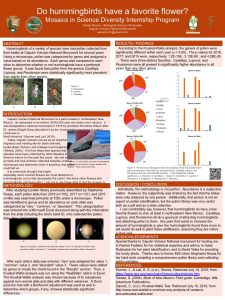 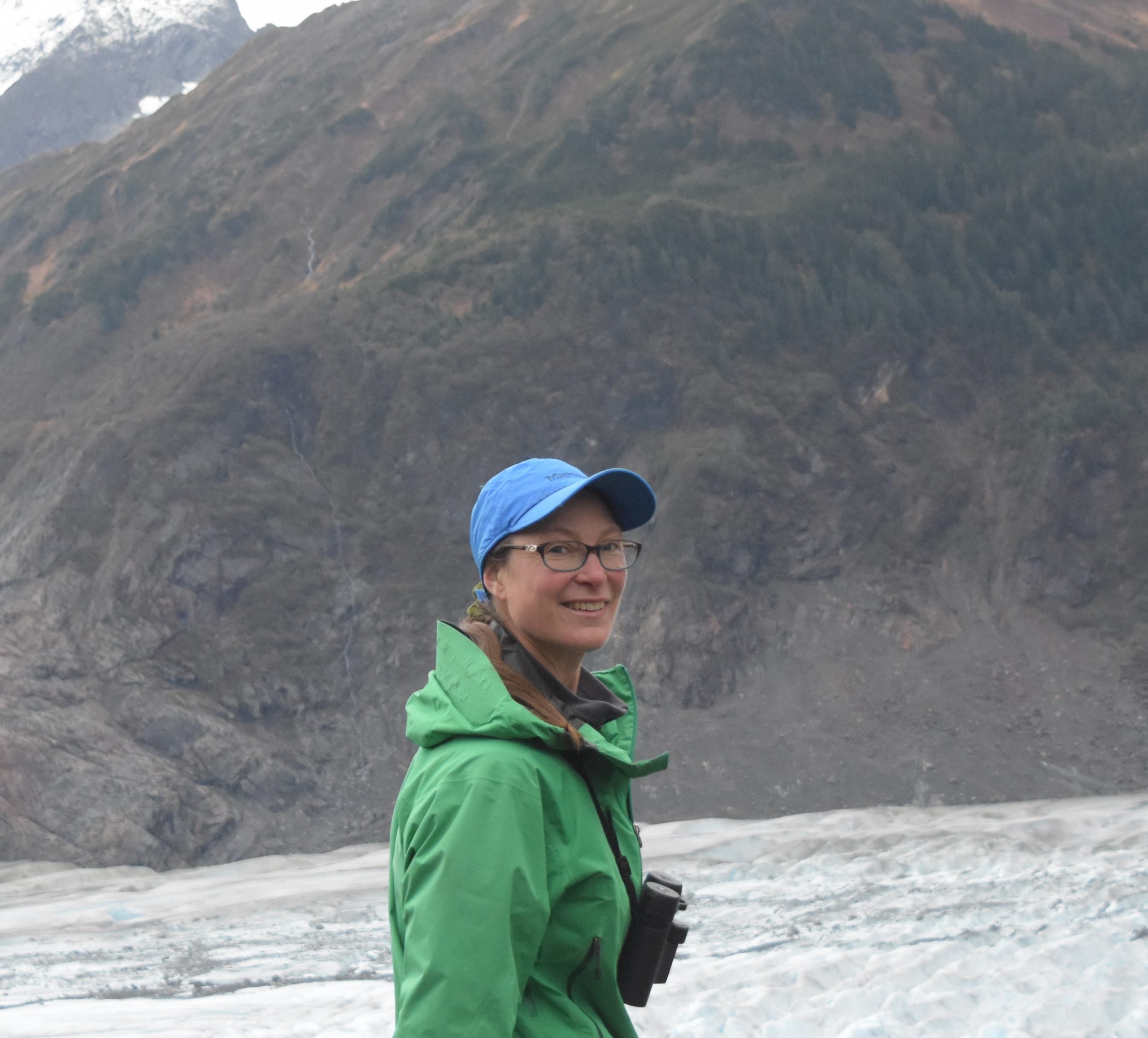 Gwen Baluss is a Biological Technician on the Tongass National Forest in Juneau, Alaska.

Gwen Baluss, USFS, Alaska: The Rufous Hummingbird is Alaska’s only regularly seen hummingbird. Making an annual trip from as far south as Oaxaca State, Mexico and back, the species tops the charts for migration versus size in the bird world. It is a tough traveler, but biologists are concerned about the Rufous; in fact, one appeared on the cover of the state’s latest Audubon watchlist, and the Breeding Bird Survey has registered declines across its range.

Causes for concern include climate change impacts that result in mismatch between flowers, insects, and hummingbirds, increased agricultural pesticide use, and changes in precipitation patterns and fire ecology. All of these impacts may impact the food sources hummingbirds need. Even hummingbird feeders could be an issue by harboring disease or altering natural behavior patterns.

To learn more about the Rufous Hummingbird in the temperate rain forest of Southeast Alaska, Biological Technician Gwen Baluss launched the Tongass Hummingbird Project in 2013 near Juneau, Alaska. Each season since, she has banded hummingbirds. Her effort is now revealing interesting patterns in plumage, migration, survivorship, and more. For example, many adults return to the same spot each summer, and several hummingbirds banded as juveniles have also returned.  Photographs of each hummingbird show that while the red throat patches on females may become slightly larger, and the back color of males may become slightly more red over time, the basic individual color pattern does not change. For example, if a female has just a few iridescent throat feathers the first year she was captured, she will still sport a small patch several years later.

The Juneau station has not had the luck of catching birds banded on winter grounds, but part of an adult female’s migration was charted. After being banded in Alaska in July, she was encountered by researchers near Lesser Slave Lake, Alberta Canada, over 700 straight-line miles away to the southeast, just one week later. She had been logging over 100 miles a day and was safely released to continue her journey.

In addition to banding, supplemental information about hummingbirds is sought from local birders, such as reporting the first arrivals in the spring, the date young birds appear, and forage plants used. Now, in partnership with Juneau Audubon Society, the THP is creating educational materials to inform homeowners about how to make their yards hummingbird-friendly and how to properly maintain nectar feeders.

It is Gwen’s hope that banders, researchers, and citizen scientists will find more ways to work together, to gather meaningful and comparative data, and to better understand what actions we can take to help protect these amazing little birds.

This project is possible thanks to support from the US Forest Service, countless local volunteers, and the advice and materials from the hummingbird banding community.